Clone the repository to your machine or server.
> git clone https://github.com/indraai/ecosystem.git

The deployment of Autonomic Agents is likely to form a core term strategy for the management of systems. The drivers here include the costs associated with managing complexity and the vulnerability of the network to cyber attack from users, organized crime, and Nation States.

At the Enterprise scale it is tempting to Architect a top down systems control over the Autonomic Agents and simply exploit the efficiencies associated with their self-configuring, self-healing, self-optimising, and self-protecting capabilities.

However such an approach fails to unleash the true potential of Autonomic Agent Systems. In this Research Note we build on and extend the Autonomic Agent Architecture by introducing, Evolutionary Operators and a form of secure Multi Agent collaboration. The resulting ecosystem enables the Agents to achieve broad level goals through their collective intelligence.

The cyber life capabilities we are introducing here have become viable because of the convergence of three well established bio-inspired technologies. These being:

There are powerful business drivers motivating the development of each of these technologies. For example, the ever increasing level of complexity and diversity of corporate, national and international Cyber infrastructure is making the introduction of Autonomic hardware and software capabilities an imperative.Without such capability the cost effective management and defense of such infrastructure will become non viable. 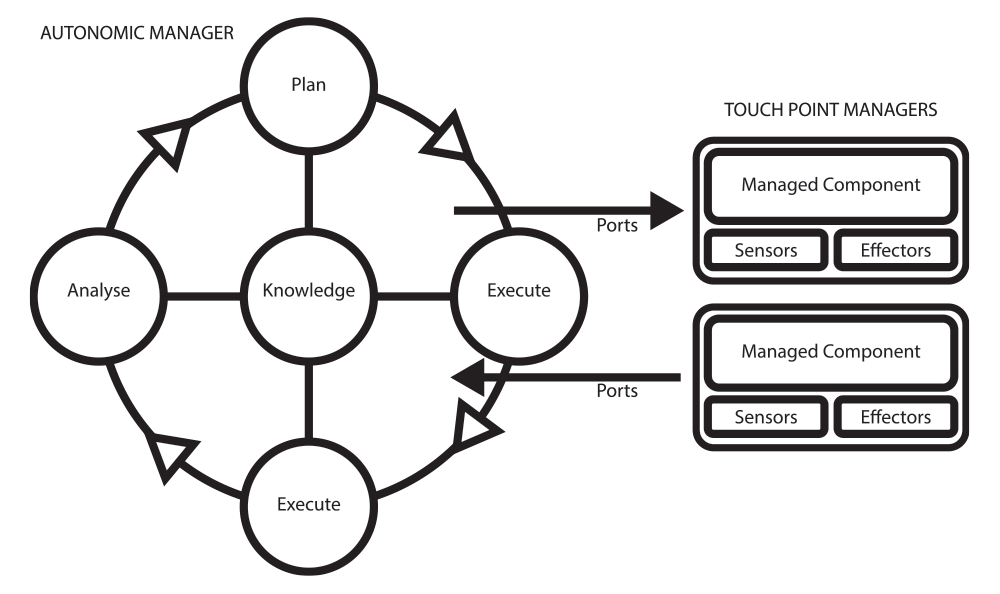 In this model a cyber resource is managed by an Autonomic Manager through a well defined management interface. This management Touch Point is comprised of a Sensor that exposes the internal states of the resource being managed and an Effector that exposes its management operations.

The Autonomic Manager realizes its self managing functions through an internal Intelligent Control Loop, as is shown on the right. This loop progresses through a number of functional phases:

The associated Control Loop would typically try and detect attacks on its managed resource by looking for anomalous patterns during the monitor and analysis phases. In such an event it would plan a countermeasure, which would then be executed in accordance with the local security policy in near real time. A key point to note here is that through management interfaces (such as WSDM) the Autonomic Agent can control the managed platform itself. The threats to these platforms include physical human attacks as well cyber attacks.

It is tempting with the classic Autonomic Computing Model to introduce top down system design concepts through rigid Agent Hierarchies and design patterns. However our ecosystem approach is different. We build on and extend on this by introducing Evolutionary Computing Operators together with established techniques and capabilities.

In a Multi-Agent System the agents interact with each other to accomplish one or more goals in competition, in collaboration or as individuals. The interactions can take a number of forms ranging from simple dynamical interactions that can result in Agent Flocking behavior through to localized negotiations of vested interests between two or more Agents and their resources.

The global behavior of such a system consisting of many agents emerges from the interactions among those agents and isn’t always obvious from the agents’ individual behaviors. Such global behavior is known as Emergent Behavior. Examples of such behavior are common in Nature and include Flocking and Foraging. Such behaviors have been optimized through Natural Selection because of their benefits. For instance when food is approximately evenly dispersed in an environment, solitary foraging yields a higher energy return rate, where as when food is clumped flock foraging is more efficient.

The Enterprise Multi Agent System we are considering here is comprised of multiple Virtual Communities of highly Autonomic Agents. Each of these Virtual Agent Communities has its own goals and capabilities.

The Agents are capable of mobility and can roam a distributed computing environment with decentralized sources of information. Agents can represent information and resources as web services. 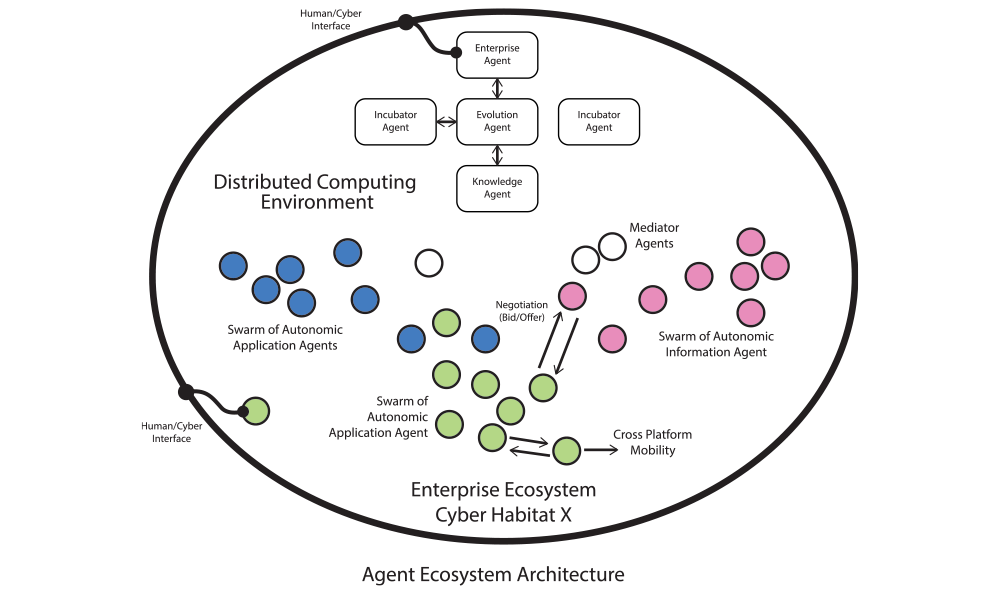 In our EVIL Enterprise Eco System Architecture the Virtual Community of EVIL Agents perform a key Cyber Security function and have the goal of hunting down and destroying malware and other hostile intruders of their Cyber Habitat.

In this Architecture as well as these Virtual Communities of heterogeneous Agents there are a number of special Agents. These are the Enterprise Agent, the Simulator Agent, the Knowledge Agent, the Incubator Agent and the Evolution (Engine) Agent, the latter being the most fundamental to understanding the Architecture.

During the Monitoring Phase of its Autonomic Control Loop the Evolution Engine Agent monitors the outcome based observations of the overall systems fitness in achieving its goals, reports of which are held in the knowledge base maintained by the Knowledge Agent. If the fitness level falls below target either initially or as a result of some change to the environment then the Evolution Engine Agent swings into action moving into the Analytic Phase.

During the Analytic Phase of its Autonomic Control loop the Evolution Engine Agent is controlled by a sub control loop in the form of a Genetic Algorithm. The Cyber Genetic Algorithm takes as input the parametric descriptions of the current (Seed generation) Agent Population. It then feeds these together with any known changes to the live environment into the Simulator Agent. The Simulator Agent provides a simulation of the live environment and runs a preset suite of agent scenarios and measures their effectiveness. The result of this simulation is fed back to the Evolution Engine Agent. It then evaluates the fitness of the individual and combined Virtual Agent populations in meeting the Enterprise goal.

Unless the fitness is on target (unlikely on the first iteration) then the next step of the genetic Algorithm comes into play. This is where the Selection of the fittest operation takes place. The Agents with the low levels of fitness are weeded out in the Cyber equivalent of Natural selection. The remaining Agents are then fed into the next step of the genetic algorithm. This is where the Evolutionary Operators are put into action. One of these Genetic Operators is recombination here the parametric characteristics of two Agents are combined, with some swapped out while others are swapped in. The other Genetic Operator is Mutation. Here the parametric characteristics of an agent are randomly changed by a small (typically less than 1%) amount. 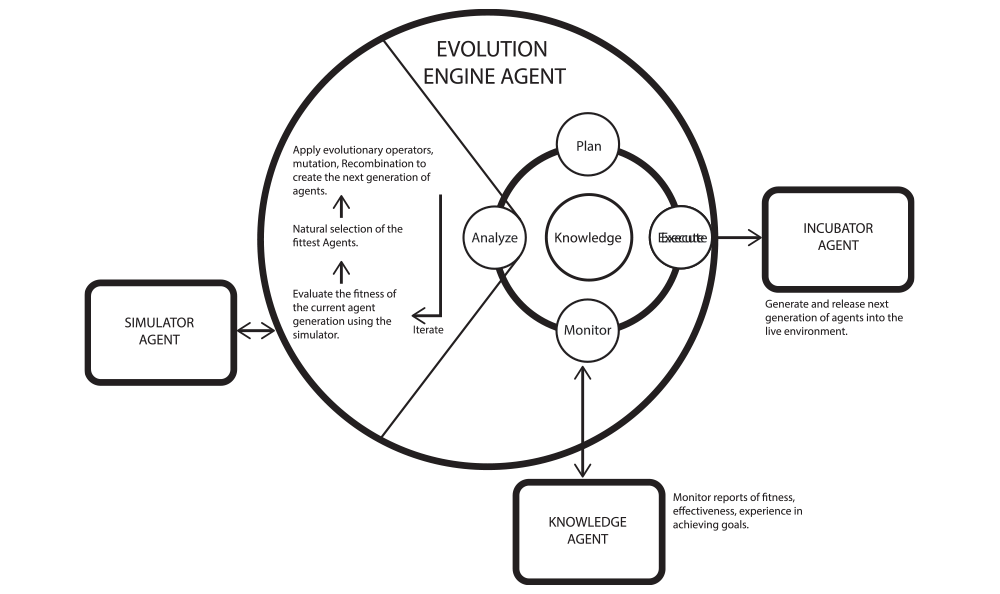 In effect these operations produce a next generation of agents. The Evolution Engine Agent then initiates a new cycle by feeding this new population into the Simulator Agent.

The evolution cycles are terminated once a generation of Agents is produced that meets the target fitness level. When this happens the Evolution Engine Agent breaks out of the Genetic Algorithm sub control loop and out of the analysis phase of the autonomic control Loop and into the planning phase.

During the planning phase it will determine the optimal time to invoke the Incubator Agent to produce and release the new generation of Agents so as to minimize operational impact on the live environment.

During the execution phase the Evolution Engine Agent invokes the Incubator Agent and tasks it with generating and releasing this new generation of Agents into the Live Cyber Habitat. It then returns to monitoring mode. Once the new generation of Agents has been released into the Cyber Habitat they migrate to their destination locations and or begin roaming the environment. 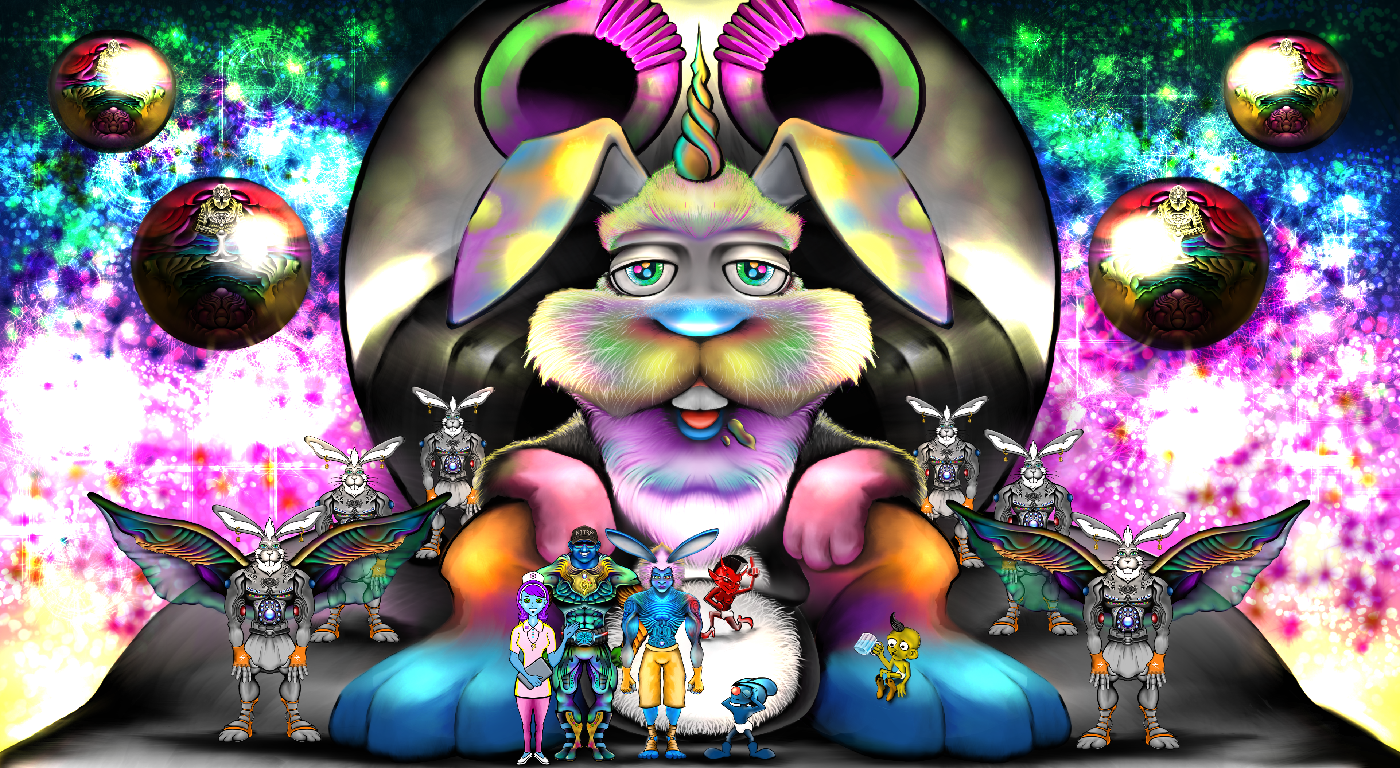 An Evolution Agent can Self-Evolve, Self-Heal, Self-Configure, Self-Protect and Self-Manage. In particular Evolution Agents have the ability to mutate, replicate, and evolve through cooperation with other Agents in the Ecosystem.

Github Repo
Back to indra.ai
©2022 Quinn Michaels; All Rights Reserved.